Writing A* Composition for IGCSE or AS - Descriptive Writing

Nardvark likes to think of himself as a pretty bad-ass writer. He wrote a thrilling adventure story for the IGCSE composition exam, which you can read here and see how it's graded here.

Are you trying to get A* in IGCSE or AS English? I can help you. Click here for more info.

However, Nerdvark thinks he can do better... so it's on!

Play Spot the Kitty on Android for free!

Nerdvark chooses "Descriptive writing" question (a) for his challenge piece:


Nerdvark knows that to get top marks, he must follow the mark scheme for CONTENT AND STRUCTURE: 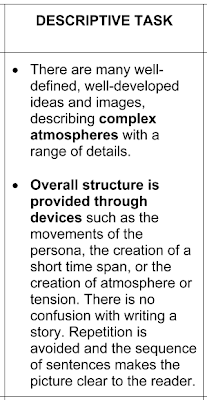 and for STYLE AND ACCURACY:

More on marking next time. For now let's see what Nerdvark writes:

After six days shipwrecked and living at the mercy of the tumultuous sea alone in a tiny raft, the hard weedy sand under my feet was as welcome as a Starbucks café. I never thought I would do it, but as soon as I had crawled out of the water, I dropped to my knees and kissed the white salty beach below me.

Tiny black crabs scuttled for shelter under the sun-bleached rocks that encircled the small cove I had landed in. From the position of my shadow and the glaring sun overhead, I judged it to be mid day, though the days on the raft had started to stretch into an unimaginable epoch. Exhausted and relieved, with the sound of the gentle sea behind me and the breezes gusting through the palm trees in front lulling me, I merely sat on my knees and took it all in.

Up above the small beach I sat upon was a dark rocky horseshoe-shaped outcropping; it would provide a good shelter. Beyond that, a dense forest of palms and other fruit trees swayed lackadaisically in the island breezes. The bright yellow dates hanging in great bunches beckoned me, making my mouth water with the thought of their flavour - heavy, robust, sweet dates, hanging there like beacons.

Just then the tranquility was shattered by a whizzing that shot past my ear. Was it an insect? Another whiz and a stinging sharp pain in my thigh - instinctually I smacked at it, but it was no wasp. My hand knocked a home-made dart out of my leg, which was followed by a rivulet of blood.

Shooting my eyes around among the trees and rocks, I could not see my assailants, but no more darts came. I did, however, hear voices speaking in a strange language made up of sounds I did not recognise. The gurgles and booms they spoke sounded like many wounded soldiers crying out in a WWII hospital dorm.

My vision was becoming blurred and my ears muffled, but at last they approached me, the people of this island. A small gang of perhaps ten men, dark skinned like myself, but less hairy; tall, lanky, with long legs and arms that swung down like tree branches, their bodies bare except for animal-skin loin cloths and painted red ochre and white ash geometric designs on their chests and faces, and vicious pointed bones jabbed through their ear lobes and noses.

As the apparent leader, with a mass of black feathers woven into his shock of ruddy hair, poked at me with a pointed stick, I passed out.

Nerdvark wrote 435 words in 1 hour (for AS students, it would have to be 600 - 900 words), including taking time to follow the five-step writing process:
For more on the writing process, click here: THE WRITING PROCESS

Nardvark has forgotten that they are having a competition and after reading Nerdvark's entry, asked if he could have his iPad and all his leftovers from the fridge if he doesn't survive the assault.

THANKS FOR READING! You've studied hard... time for a study break! Written by K.I. Borrowman