The Nerdvark's List of TOP TEN Mistakes that Drive Him Crazy

We all have our top ten lists. Top ten gaming mouses. Top ten funny things George W. said. Top ten (or 1,672) favourite movies on IMDB. The Nerdvark has compiled a list of 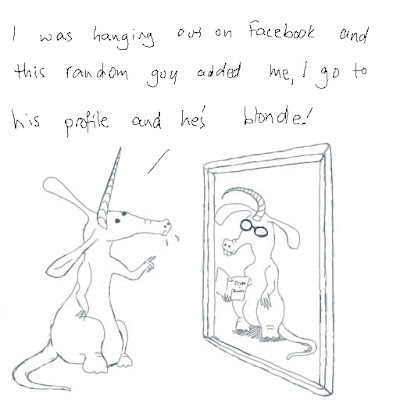 10. Male/female suffixes (blond vs blonde)
9. Misspelling commonly-used words
8. Wrong word (effect vs affect)
7. Mixed up homophones (your vs you’re)
6. Comma splices and run-on sentences, and of course complete lack of punctuation
5. Random capitalization
4. Misplaced apostrophes
3.  “To beg the question”
2. Throwing around “whom” to sound intellectual.
1. Misquoted nonsensical idioms (I could care less) 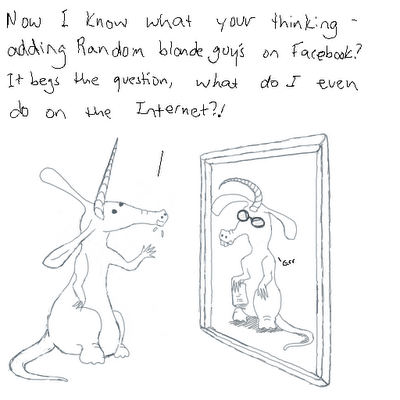 Blond vs blonde - If this is a toughie for you, just be thankful you’re not French or Spanish or something. At least in English there are only a handful of words that care whether they’re describing a chick or a dude. Basically, ladies get an ‘e’ and gents don’t. So if you are a girl, you’re a blonde, and if you’re a boy, you’re a blond. But that being said, I guess if you are a blonde or a blond you’ll never really figure this stuff out, will you?
And that brings us to misspelling, and one of Nerdvark’s favourite websites, http://www.d-e-f-i-n-i-t-e-l-y.com/. If you’re not very good at spelling, for the love of dog, practise! Lazy? Prefer playing? Then play word games, like these ones here: http://www.eastoftheweb.com/games/.
Wrong word - Some words are verbs, and some are nouns. For example, in the case of affect vs. effect, the first is a verb (“Seeing the wrong word affects the Nerdvark very negatively.”) and the second is a noun (“Seeing the wrong word has a very negative effect on the Nerdvark.”) This guy here can help with that one. http://theoatmeal.com/comics/misspelling
Homophones – The Nerdvark is mixed-up-homophopic. In other words, whenever he sees the word “your” where the word “you’re” should be, his head explodes. Fortunately, the Nerdvark is a fictional character who exists only in a fictional mirror, so his head always grows back by the next frame. But it still hurts – give him a break and figure out whether you’re board or bored, will ya? Perhaps the oatmeal says it best: http://theoatmeal.com/comics/misspelling 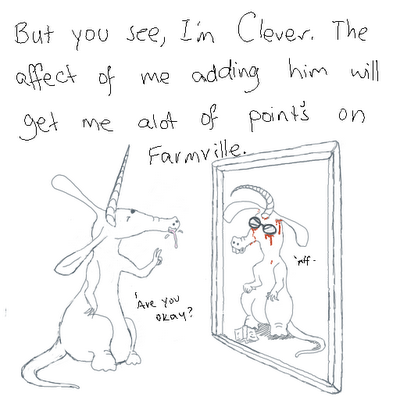 Punctuation – A sentence begins with a capital and ends with a full stop (period, if you’re American).  A sentence consists of a subject and a verb. If you want to make a compound sentence, you need to do so by adding a joining word, like and, so, but or because.  It looks like this: “I like cats. They’re fluffy.” Becomes “I like cats, because they’re fluffy.” You can also join two sentences together with a semicolon [;] if their points are closely related, like this: “I like cats; they’re fluffy.” But every time you join two sentences with a comma, which is what we call a comma splice, Nerdvark bleeds from the eye sockets.  So please stop doing that.  Along the same line, we have the run-on sentence – a sentence that should have ended several ands ago, and worst of all of all, complete and utter lack of punctuation. For example, this:
I like cats they’re fluffy i have two cats one is white with orange spots and the other is mostly white with ginger on his face and tail they are named baker and lance they like to play together they’re both really fluffy.
You can see how this can be annoying.
Capitalization - In English, we use capitals at the beginning of the first word of a sentence, for keywords in a title, and for proper nouns (names). We don’t capitalize random nouns, and we don’t capitalize something to emphasize it. If you want to emphasize something, try underlining, italicizing, or finding a more dramatic, emphatic word to use instead. For example, instead of saying “That’s Big,” try “That’s enormous,” “That’s massive,” or “That’s gargantuan.”
Apostrophes – use them in contractions (omissions if you’re British) - in place of missing letters, and in possessives - when something belongs to something. Don’t use them in plurals or anywhere you happen to see a letter S. It’s as simple as that. Maybe this can shed some light on it if you really think “kitten’s for sale” makes sense: http://theoatmeal.com/comics/apostrophe
To beg the question – Back in the olden, olden days, when rhetoric and public speaking were university departments, the ancient Romans and ancient Greeks coined a lot of terms to refer to uses of language. To “beg the question” is one of those terms.  “Begging the question” is a logical fallacy whereby one tries to prove a point by restating the point; for example, if you say “My cat’s overweight because he’s fat,” you are begging the question. What question? The question of why your cat’s overweight. Get it? This is a difficult one, and I only get it because I took philosophy in uni; in fact I actually reprimanded one of my colleagues the other day for misusing “begs the question”. Yes, an English teacher.  I’m relieved to know that I’m not the only person (other than the Nerdvark) left on the planet who is bothered by the misuse of this phrase: http://begthequestion.info/. 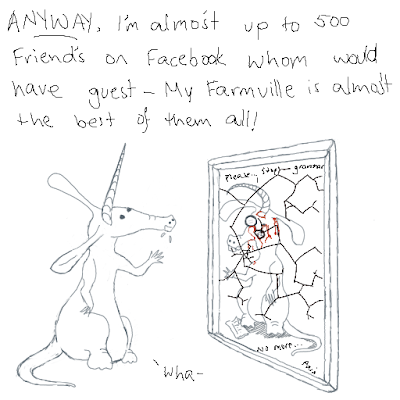 Whom – not just a clever way to say who. “Whom” is an object pronoun, like him, her, me, you, them, and us.  If you’re not sure, try answering using the word him in place of the word whom.  Like this: “Give it to whom? Give it to him.” (“Object” means it is the receiver of the action of the verb, and “pronoun” means it stands in the place of the noun, like they in “My cats are cute when they lick each other.”) So “Whom was that masked man?” is incorrect, while “Whom did that man mask?” is correct.
Idioms – most of them actually do make sense. “I could care less” means you do care. So if you don’t care, you should say you couldn't care less. Saying “I could care less” also means you are US American, since, according to the history of the phrase here http://www.worldwidewords.org/qa/qa-ico1.htm, US Americans are the only ones who claim that they could care less when they really mean that they couldn't. 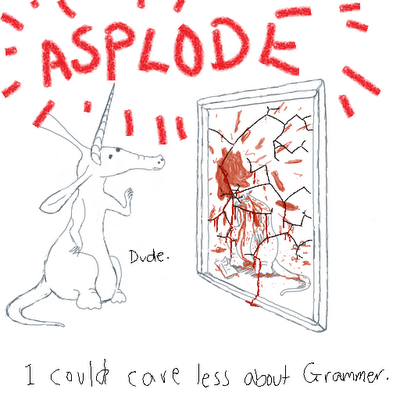 Thanks for reading... read on, read on... my website: www.kiborrowman.net