Nardvark hates taking notes. He would rather eat banana pizza, sleep, or frankly even spend the whole day riding up and down in a bad-smelling elevator than take notes. But his good friend Nerdvark wants to convince him that there are three good reasons to take notes: 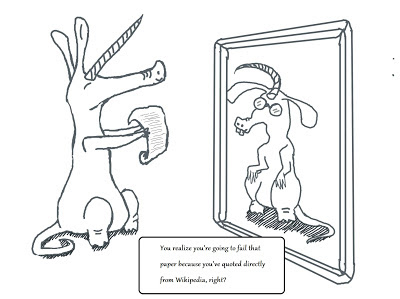 Research - As you know, teachers love to assign research projects. Wouldn’t it be so easy if you could just go home, type the topic into Wikipedia, copy and paste the whole thing onto a Word document, print it off, and hand it in? But for whatever reason that’s not good enough for teacher, oh, no! Your research project also has to be in your own words! Well, by taking notes from Wikipedia (or better yet, a reputable website / book / journal written by someone who knows what they’re talking about  - see the links at the bottom of each Wikipedia page for that) you can then go on to write all the info in your own words. More on that here. 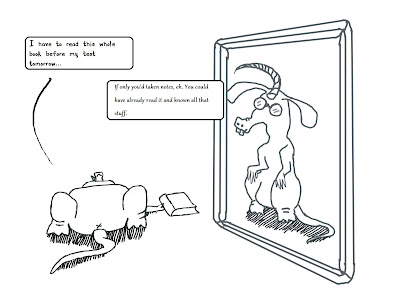 Revision - You hate reading text books and hand outs, so why go through the hassle of reading them a second time when revising for exams? The first time you read a text book or hand out from a teacher, take careful notes. Then when it’s time to revise, you just have to read through your notes. Of course, if your notes are not clear and you don’t understand something, you might have to re-read parts of the textbook again. Oh well, sucks to be you. 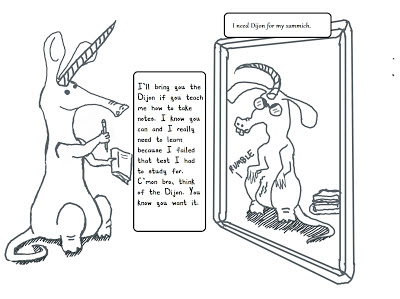 Speed - Sometimes teachers tell you things in class that you need to know for tests or homework or whatever, and they don’t really give you enough time to write it down. Some teachers are so mean, when you ask them to repeat it, they say stuff like, “No, I already said it twice.”  If you are good at taking notes, you will be able to note down the essence of what any teacher says simultaneously while they’re talking and you won’t miss anything important.

This is even more useful once you’re in university, and all you do all day is listen to professors talk and write down what they say.  It’s pretty much all important, too.

Some students say, “No problem; I’m just going to record the lectures and take them home and listen to them again.” Really? Is that what you want to do? Listen to university professors talk all day, and then listen to it all again all night? And when exactly do you think you’ll have time to read the text books, do the research assignments, and revise for the exams? Take notes during the lectures!

Problem: Nerdvark wants a smoked-meat-on-rye sandwich, but Nardvark won’t bring him the Dijon mustard until he teaches him how to take good notes. Here it is, folks -- good note-taking:

The Text: (or lecture)

The Nardvark is a very rare creature. Only one is known to exist in captivity at the moment. The Nardvark is the result of an unfortunate hybrid breeding experiment between two very unlike species, the narwhal and the aardvark. The match was not expected to result in offspring, however, nature took its course and despite scientists’ attempts to destroy all fertilised eggs, one rolled under the counter and resulted in the Nardvark we know today.

The Nardvark can be described as uncommonly ugly, having received the less pleasing traits from the two parent donors. It also has many strange habits. It has a voracious appetite and is exceptionally lazy.  The only reason the Nardvark has survived this long is that it is able to project its inner nerd into the hall mirror for deep talks.