Hooking and Wowing your Reader - Take your IB, AS, or IGCSE Exam Essay from Good to Awesome

Nardvark is following the five-paragraph essay structure for his argumentative and literary essays, but still getting mediocre grades. Part of the problem is that his essays start like this:

This essay will talk about blah blah blah yadda yadda

BORING!  Come on.  Your average examiner reads and grades about 200 essays.  Each time he or she reads an essay that begins with those words, a puppy chasing a butterfly falls off a cliff. 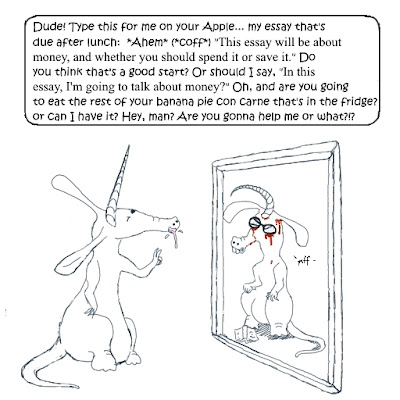 Then, after reading the same three PEE paragraphs about the same three points that the last fifty-seven essays made, what if the the examiner then has to read the words...

In my opinion, this is a very good poem and it really made me think.

That's how Nardvark finished his last literary essay. A litter of kittens following a rainbow got blown to bits by a Cambodian land mine when the examiner read that.

"I know I'm supposed to HOOK my reader and leave my reader with a WOW," you're saying.  "But how?"

The first sentence of any piece of writing should hook your reader like a fish hook catches a fish, with a tasty little worm, then draw it into the boat (or in this case, essay) where it lies flopping and gasping for water until it dies (or in this case, finishes reading the essay.)

The last sentence should leave your reader, as he or she finishes reading and begins considering what grade to give you, thinking, "WOW! That was certainly a great essay!"  If the beginning of the essay is good, the middle is ok, and the end sucks, the reader is going to be disenchanted by the time he or she is ready to start grading. So the last sentence should be awesome.

The following methods can be used in HOOKS and WOWS, both:

1 Quotation: Can you think of any famous person who pertains to the topic? Can you remember anything he or she said related to the topic? If you are writing a literary essay, a quotation right out of the piece of literature can be used, but a quotation from another piece of literature by the same writer or even another writer could hook your reader equally well, or even an non-literary quotation that draws the reader into the topic you're exploring. For example, try starting an essay about Miranda, the only female character in Shakespeare's "The Tempest," with the following:
Marilyn Monroe once said, “I don't mind living in a man's world, as long as I can be a woman in it.”

2 Rhetorical Question: That would be a question that's not there to be answered; it's merely meant to make the reader think.  If you're writing an essay about the ideal community, you might use the following:

A sky gray with pollution, cars and SUVs whizzing around like torpedoes, glass towers instead of green parks; is this the ideal community you want to raise your children in?

3 Dramatic or Controversial Statement: Grab your reader's attention by saying something they may not like the sounds of, or may not agree with.  For example, you might start or end an essay in which you are asked to analyze Death in Emily Dickenson's "Because I Could not Stop for Death" like this:
Be wary if someone appears polite and civil -- he might be about to offer a ride you don't want to take.

4 Anecdote: A very short story about someone, even yourself, that pertains to the topic, is a personal way to draw your reader in. This is where it becomes valuable to listen to your classmates during class discussions, and read their tweets. Maybe you don't have a story for the topic at hand, but chances are, someone you know does. For a discursive essay entitled, "Good leaders are born, not made," you might start with this story:
The coach was late to the last practice before the season's final match. The younger players were running around like wild animals and the older boys were lurking by the fence, laughing. Bobby (not his real name) strode out onto the pitch and started shouting like a PE teacher. Within five minutes, he had the whole team motivated and inspired to spend their last hour of practice time working on skills instead of wasting time, and the next day they won the match.

So, we can see that hooking the reader, like hooking a big shiny fish, is important, and not too difficult.  Your WOW can tie into your hook, or it can be a separate entity. Both HOOK and WOW should relate to the topic of your essay.