A* Descriptive Writing for IGCSEs

Recently, a student wrote to the Nardvark:

Hello, I actually needed some help for my descriptive writing since i really don't know how and where to start it from but i really want to attempt it in the exams if possible and get an A* in English subject . Also if u could give me some topics to start on.

In his usual incredibly helpful and attentive manner, Nardvark printed off the letter in really huge font to waste as much paper as possible, crumpled it up, and tossed it at his wastebasket. He missed.

The paper ball bounced off the top of the growing accumulation of debris surrounding the waste basket and rolled to a lazy stop at the base of the Nardvark's stinky laundry pile. The Nardvark stopped wearing clothes several weeks ago because he ran out of clean laundry, but that's okay because he's very furry. Anyway, the odour emanating off the pile of mouldy clothing, which is not unlike cream-of-rotten-eggmcmuffin-and-toilet-brush-graveyard soup, helps Nardvark find his way back to his room in the dark. Nardvarks don't have very good night vision, but they have excellent senses of smell due to their very long nostrils. 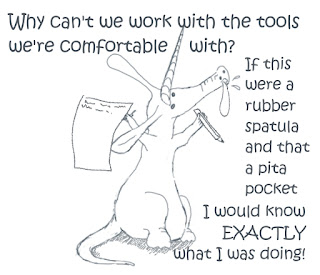 The dirty laundry pile is also a valuable tool in the Nardvark's daily life, because without it he would have to lift his feet quite high in order to get in and out of bed. Nardvark's legs are quite stubby so he prefers not to exert too much energy by lifting his feet all the time. When he finishes playing X-Box for the day, instead of standing up and walking over to the bed, he simply rolls onto his back and then flops towards the laundry pile. He then half-rolls half-flops his way up the laundry pile to the surface of the bed, much like an overweight walrus coming ashore onto a chunk of arctic ice. At the crack of noon when he wakes up, Nardvark merely rolls down the pile in the direction of the kitchen.

Nardvark's kitchen is much what you might expect, having visited his laundry pile. The lower cupboards all contain food, and to make his foraging easier, the food is sorted into "sandwich filling" and "pizza topping." The top cupboards are difficult to reach, and therefore contain only dishes, which Nardvark rarely uses because they're difficult to reach. (an example of "begging the question" by the way.) Nardvark takes care of his shape (a pear) by eating six to seven meals a day, except on weekends because he is not awake for long enough to eat so many meals. For these meals he alternates between sandwiches and pizza. Nardvark's favourite sandwich fillers include peanut butter, mayonnaise, mashed banana, five-pepper hot sauce, jelly beans, and fruit cup. These are also his favourite pizza toppings, which is why the border separating sandwich fillers from pizza toppings in his kitchen is very fuzzy and gray, like an out-of-focus photo of a sleeping elephant.


I guess what I'm trying to get at is, this is the sort of writing you need to do on the composition section of the IGCSE English exam. This is specifically first-language English, and the international course syllabus is number 0500. If you're studying this course, you're going to have to write a creative composition in Paper 3 Section 2.

You have a choice of four questions: two are narrative and the other two are descriptive. There will be a question or a scenario for each. It could be a first sentence, a brief synopsis of a situation, or a leading question. You have to pick one and write a composition.


For descriptive composition, you need to keep in mind that you are NOT writing a story. There is no plot, no climax, probably no dialogue. You can have a character and a setting, like in a narrative, but you will stick to describing the character and the setting. Your descriptive composition should NOT cover a span of time like a narrative. What you SHOULD focus on is creating an image in the reader's mind, and for this you need to use figurative language known as imagery. Remember that metaphor, simile, personification, and other figurative language tools like that all add to imgery.

For more on imagery look here.

To learn more about the descriptive task, click here.

In terms of topics, I highly recommed getting your hands on some past papers. Keep in mind that the orgainzation of the paper has changed recently (2015) so if you're looking at past papers from before that date, you'll see six instead of four options, and the other two are discursive or argumentative essays. Don't even be looking at those. Just pick your descriptive piece and write a practice composition.

Feel free to check your practice writing in the comments for this post and at some point the Nardvark might give you some feedback. It might even be useful!

Till next time, this is Nardvark, going for a nap.